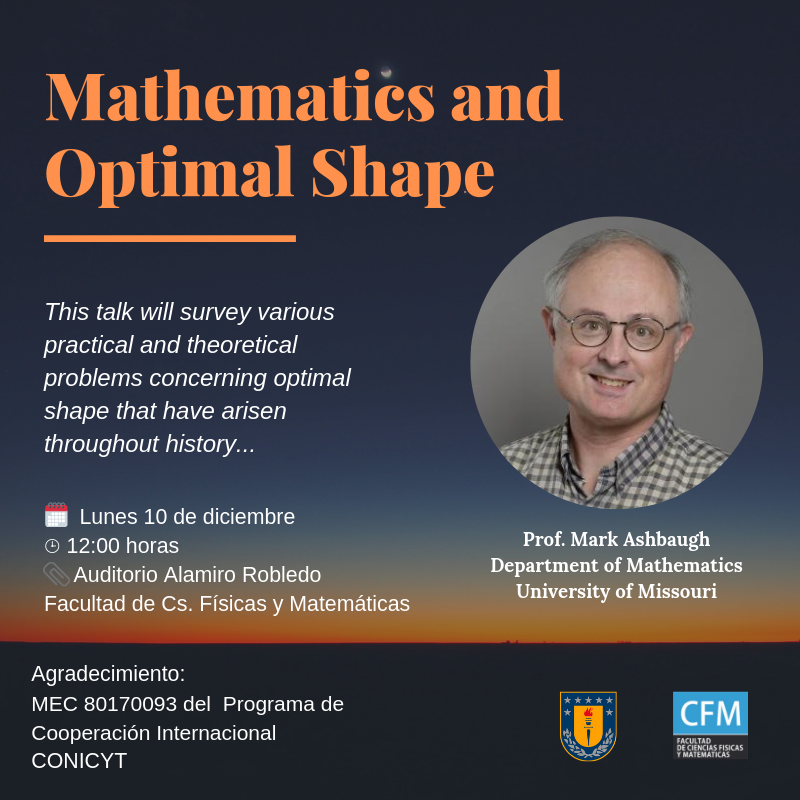 This talk will survey various practical and theoretical problems concerning optimal shape that have arisen throughout history. The focus will be on shapes that maximize or minimize some quantity when another quantity is held fixed and on similar problems for the natural frequencies of musical instruments such as for a vibrating string or membrane (drum). The first such problem considered is the “Problem of Queen Dido”, that of enclosing the most area by a given perimeter.  This problem arose some 2,800-2,900 years ago, in the founding of Carthage on the coast of North Africa.

Beyond the Queen Dido problem, people encountered problems of measuring the area or size of irregularly shaped regions for the purpose of land transactions. It is said, for example, that the ancient Mesopotamians valued an agricultural field according to the number of steps it took to walk around it. On the other hand, the ancient Greeks knew that among rectangular fields of a given perimeter the square gives the most area, and that to try to measure the size of a field or of a city you could only get a rough idea by finding its perimeter, especially if it were irregularly shaped (long and narrow or whatever).  They also knew that the answer to the Queen Dido problem was the circle. They and later cultures made interesting observations regarding the honeycombs of bees, the growth of cities, and why a cat curls itself into a ball on a cold winter’s night.

The Pythagoreans were inspired by the discovery that the natural tones produced by a vibrating cord or string are simple multiples of each other, with this observation shaping their outlook on the world.  When you move up from one-dimensional objects to two, you find that drums do not share this property, which makes them less “musical”, but perhaps more interesting. You also have much more freedom regarding shape, and you can ask how, among drums of a given area, you should choose the shape to make the fundamental tone as low as possible and other related questions.

As we proceed through some of these examples, we will comment on the various results that have been proved mathematically, and on some that remain to be proved, while giving the main ideas behind some of the proofs. We will also look at several suggestive pictures relating to vibrating drums and plates.